Regions of Canada
Remember Jacques Cartier? The king of France sent him to find the Northwest Passage, a sea route to China, when he landed on North America - more specifically, today we call it the Gaspe Peninsula in Quebec.
Later, Samuel de Champlain came as well, he was a French mapmaker. He set up the first colony at Ile Sainte-Croix (that didn't go so well), and then the second one at Port Royal.

In 1608 he founded the settlement of Quebec. Soon more French settlers came and were clearing the land and building homes, and Champlain made trade agreements with the First Nations peoples. He sent French explorers to live among the Ouendat and learn their language, and although life was hard for the settlers, the colony slowly began to grow. Champlain was named the governor of the colony of New France.

​
The First Settlers of New France
The first people to come to New France were not all explorers, many men and women brought their families from France wanting new beginnings. Some were seeking adventure and many were looking for fresh starts.
Louis and Marie Hebert were two of these people - they sold their house and garden in France and came to New France with their three children to farm a piece of land beside the St. Lawrence River.
They cleared land to grow grain and vegetables, and they were the first wheat farmers in Canada. They also raised chickens and pigs and planted an orchard with apples they brought from France. Louis also made and sold medicine - they were incredibly hard working people as most of the settlers who came were. After a lot of hard work, the Hebert family became successful settlers in New France. 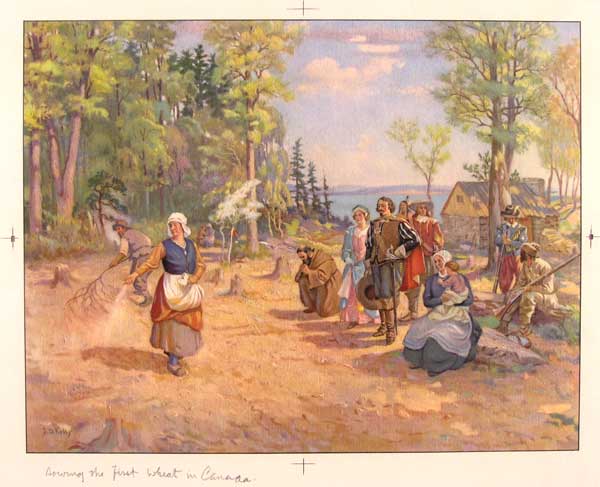 Many of the settlers who came to New France led lives that were centered on farming and trade. The land in New France was owned and controlled by wealthy (rich) men called seigneurs. The habitants paid the seigneurs with part of their harvest each year to in  exchange for being able to live on, and farm, the seigneurs land.

The land was divided into long narrow strips that were all along the St. Lawrence River.